Calprotectin, a calcium-binding protein produced in cells such as neutrophils, is released during inflammation.
Fecal calprotectin works as a biomarker of gastrointestinal inflammation and neoplasia. In the presence of an inflammatory bowel disease (IBD), neutrophils influx into the intestinal lumen and release calprotectin,
which is excreted in the feces.

Consequently, the fecal calprotectin concentration can be used as a measure of the number of neutrophils in the bowel lumen and as an indicator of the severity of intestinal inflammation. Fecal calprotectin measurement provides a reliable indication of the presence of inflammatory bowel disease.

Through the use of this biomarker, many patients with irritable bowel syndrome can therefore avoid unnecessary colonoscopy. In several publications, fecal calprotectin concentrations have been shown to be strongly correlated with histological and endoscopic parameters of disease activity in patients with chronic inflammatory bowel disease.

Therefore, measurement of fecal calprotectin provides a means of objectively assessing the response to treatment of chronic inflammatory bowel disease and are useful for monitoring IBD patients during clinical remission phase providing early detection and treatment of IBD relapses.

CALiaGold® test is a particle enhanced latex immunoassay (PETIA) and allows quantification of calprotectin in faecal extracts. The turbidimetric assay is based on the agglutination reaction between latex particles coated with antibody and the antigen in solution.

CALiaGold® reagents are developed to obtain a high sensitivity and high linearity method. 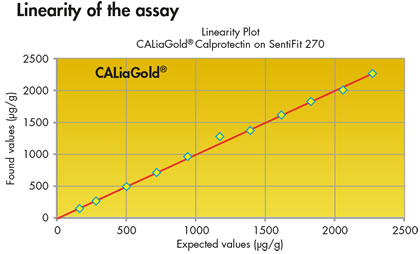 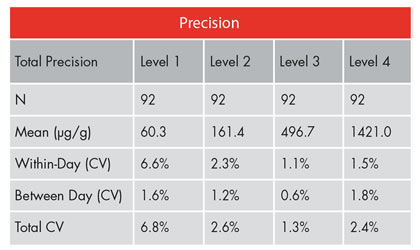 Product available for sale in EU and other selected Countries, please contact export@sentinel.it for info. Not for sale in the USA.

We use cookies to ensure that we give you the best experience on our website. If you continue to use this site we will assume that you are happy with it.OkPrivacy policy